June 11, 2018
There aren't many restaurant jobs I haven't worked - well, except for the most important one: cook (if only you didn't have to be a good cook to be a cook). But name almost anything else, and I've done it. Dishwasher, busboy, host, waiter, bartender. Some were terrible, some were a blast, and all were made cool in hindsight after reading Anthony Bourdain's Kitchen Confidential. 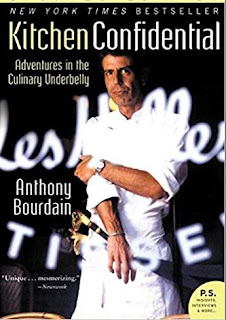 I first read Kitchen Confidential while in New Zealand on a working holiday visa. I'd gotten a job washing dishes at a spot were I was hoping to bartend, and his book made that decision feel romantic and exciting (rather than depressing). While I'd worked in restaurants before, I'd never worked in the kitchen. It was a different planet from the front of the room.. Bourdain captured it better than I ever could, and I highly recommend reading his account.

I only stayed back there a few weeks, but it's a few weeks I'll never forget. Night after night, I hustled like mad between a gauntlet of chefs (hollering, "backs!" to let them know I was behind them so they wouldn't slice or scald me), grabbing steaming pans before they could even yell "pots!" It was controlled chaos with some of the craziest people I'd ever met. While the rest of the staff dined on big bowls of pasta for pre-shift meals, the dishes got steak - and we earned every bite.

The cooks were a different breed, and seeing them handle a dinner rush up close was a thing of beauty.I re-read Bourdain's book a few years ago, and it brought me right back to that kitchen and those chefs. I moved on to bartending after my brief dishwashing stint, and I saw the affection in their eyes for the new dish and the scorn for me moving to the other side - and part of me felt a pang of regret (but not enough to go back).

I miss those chefs, that chaos, those hard-earned steaks, and the post-shift beers with people you'd survived something with. I miss the bar manager I had right after, who responded the same way every time I asked if a drink should have a lemon or a lime in it. ("Put 'em both in everything, mate. It helps fight the scurvy.") And I'll miss Anthony Bourdain, who I didn't know but somehow felt like I did.

March 25, 2021
I think I read more this past year than I have in any year since grad school, and nothing kept me reading quite like the Lonesome Dove saga. I picked up Lonesome Dove because one of my favorite podcasts, The Watch, was doing a special on it - I'm so glad I did. Not since I was a kid have I been so fully immersed in a novel as I was with this series.  The sequels are each great too (Dead Man's Walk especially), but nothing quite like the first. If you haven't read them yet, I highly recommend diving in, and The Watch pod is a great companion. I've been picking up other McMurtry books since finishing.  I first posted this yesterday (3/25) and just read that Mr. McMurtry passed away today. Thankful for the books he wrote, especially in this pandemic year.
Post a Comment
Read more