May 15, 2018
Raising a glass of Kool-Aid (non-electric, but thanks) to Tom Wolfe, who wrote the book that set me on a course of exploring too many books and bands to mention.

I was fifteen or sixteen when I first picked up The Electric Kool-Aid Acid Test (from my high school library no less), and its wild tale wildly told opened up possibilities of writing that I hadn't considered until then. I started listening to The Dead, wearing terrible tie-dyes, and using ellipses and exclamation marks like crazy. (I stopped with the punctuation because only he could really pull it off). The tie-dyes took longer to shed.

I'm going to put his other great reads on my list to check out soon. Here's to Tom Wolfe and his electric writing. 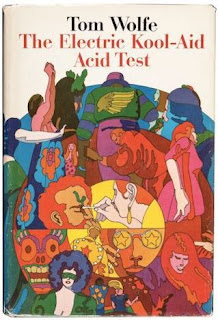 March 25, 2021
I think I read more this past year than I have in any year since grad school, and nothing kept me reading quite like the Lonesome Dove saga. I picked up Lonesome Dove because one of my favorite podcasts, The Watch, was doing a special on it - I'm so glad I did. Not since I was a kid have I been so fully immersed in a novel as I was with this series.  The sequels are each great too (Dead Man's Walk especially), but nothing quite like the first. If you haven't read them yet, I highly recommend diving in, and The Watch pod is a great companion. I've been picking up other McMurtry books since finishing.  I first posted this yesterday (3/25) and just read that Mr. McMurtry passed away today. Thankful for the books he wrote, especially in this pandemic year.
Post a Comment
Read more